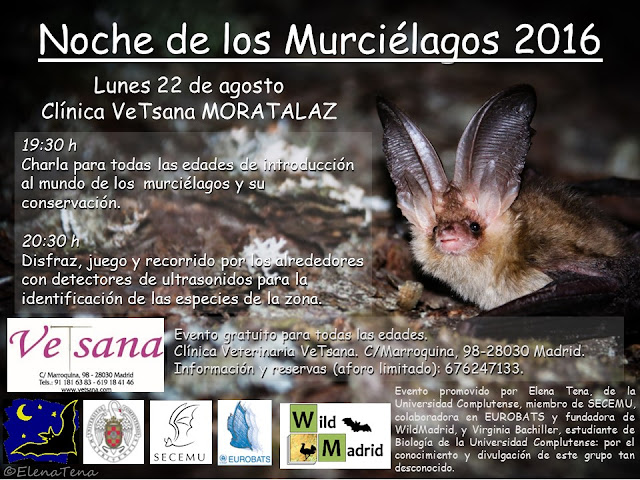 Bats make the world a better place for us humans and the biodiversity that we depend on 20th International Bat Night extends from Europe to Asia, Africa, America and the Middle East On this last weekend in August and thereafter, innumerable activities in Europe and around the globe will inform about the fascinating features of bats as well as the need for their conservation. The International Bat Night is an annual event organised under the auspices of the “Agreement on the Conservation of Populations of European Bats” (EUROBATS). Directed at the general public, the activities are organised by Nature Conservation Agencies, NGOs and volunteers. They aim to bring people closer to these often misunderstood mammals and their mysterious world by disproving still existing prejudices. The true facts about bats actually prove the opposite. Almost 1.400 species of bats are providing irreplaceable services to sustainability of terrestrial ecosystems worldwide. While the insectivorous bats almost solely contribute to natural insect pest control at night, the fruit and nectar feeding bats play a crucial role in seed dispersal and pollination for many plant species. The bat night 2016 allows to watch one of the largest colonies of Mexican free-tailed bats in California, listen to the lecture about bats at the bottom of Hrazdan Canyon in Armenia or hear their mysterious echolocation calls in Algeria. There are hundreds of events across the world, from the US to Belarus, where some will enjoy a crepuscular journey through Knox Farm in the state of New York accompanied by a bat talk when others will help to release rehabilitated animals back to nature in Ukraine. In Croatia, children will create their own bat masks and costumes for a Bat Disco night whereas Portuguese kids have an opportunity to identify species with a bat detector near the ancient galleries of Lousal mine. “When EUROBATS has launched the Bat Night back in 1997 in a few European countries, probably nobody imagined that one day it would become an almost global grass root event that continues to expand every year” says the Executive Secretary of EUROBATS, Andreas Streit. “This year, which marks the 20th Anniversary of the International Bat Night and the 25th Anniversary of EUROBATS, we have shipped posters to announce the event as far as India! This is particularly rewarding since in India as well as other countries bats are often still perceived as a pest that is harmful e.g. to agriculture.” he adds. PRESS RELEASE For immediate distribution Notes to Editors The Agreement on the Conservation of Populations of European Bats (EUROBATS), a binding international treaty which was concluded in 1991, presently numbers 36 states among its Parties and counts 63 range states in Europe, Northern Africa and the Middle East within its territory. The Agreement was concluded under the auspices of the Convention on the Conservation of Migratory Species of Wild Animals (CMS), which recognises that endangered migratory species can be properly protected only if activities are carried out over the entire migratory range of the species. Administered by UNEP, EUROBATS aims to protect all 53 species of bats identified in the Agreement Area, through legislation, education, conservation measures and international co-operation with member states as well as countries that have not yet joined. (www.eurobats.org) For more information, please contact: Andreas Streit, Executive Secretary, UNEP/EUROBATS, Tel. +49 228 815 2420 or e-mail eurobats@eurobats.org or Dr. Suren Gazaryan, Scientific Officer, UNEP/EUROBATS, Tel. +49 1520 3022271 or email as above.